This section provides tutorials and/or additional information for various components available within the NOAA/CIMSS Volcanic Cloud Monitoring Website. Many of the links contained within this section are linked to from various places through the website, but organizing them into a single, easy to navigate page is provided for users desiring more information or for users not familar with all products.

False color or multi-spectral imagery is a imaging technique used to include multiple pieces of information (in these images, spectral information) in one image. The resultant colors of specific phenomona within false color imagery generally appear in a specific color or color range. For example, volcanic ash and dust will often have a magent/pink color in the false color imagery discussed below.

This section describes non-false color imagery avaiable within alert reports and in the satellite imagery sections of the website. 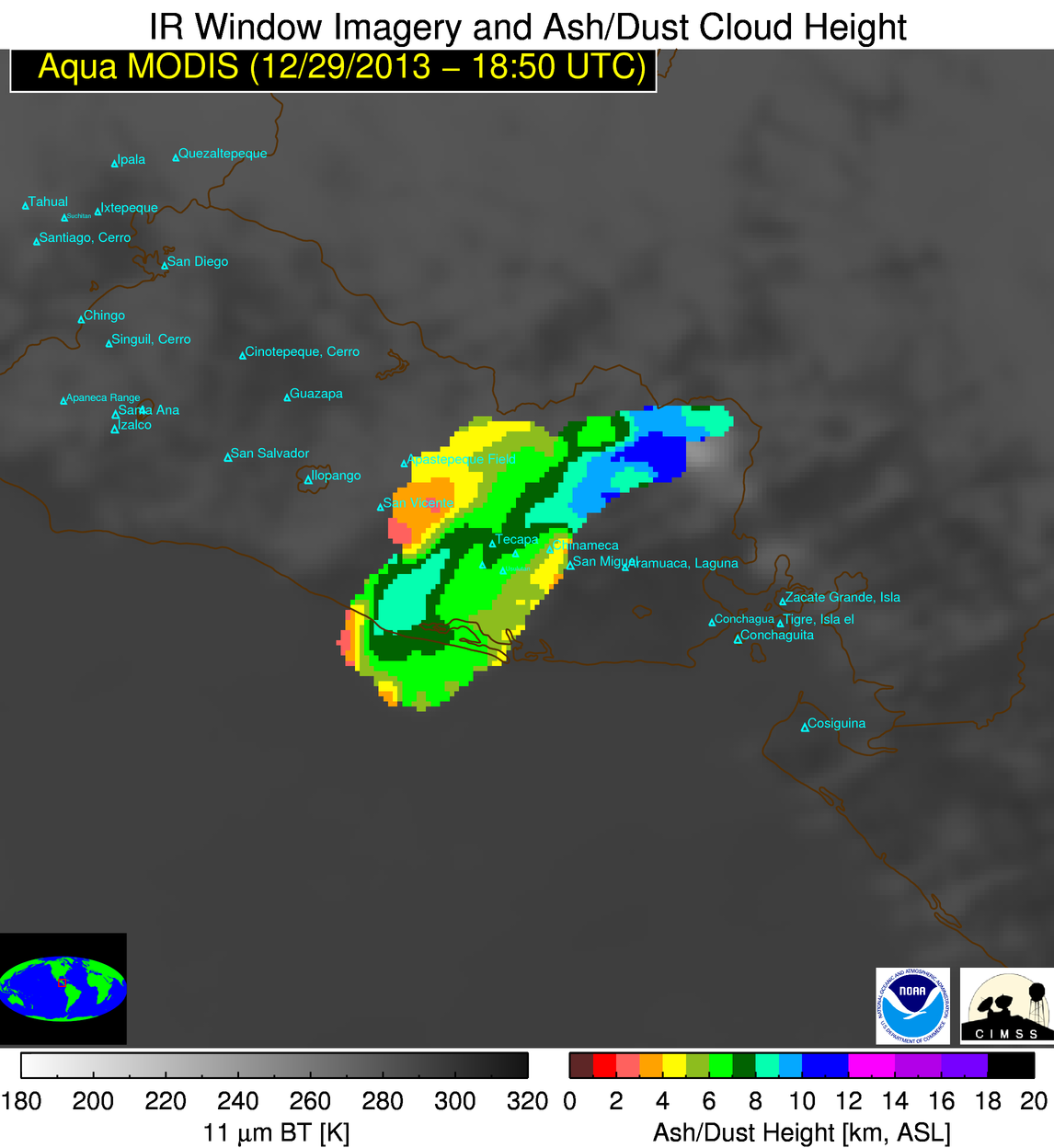 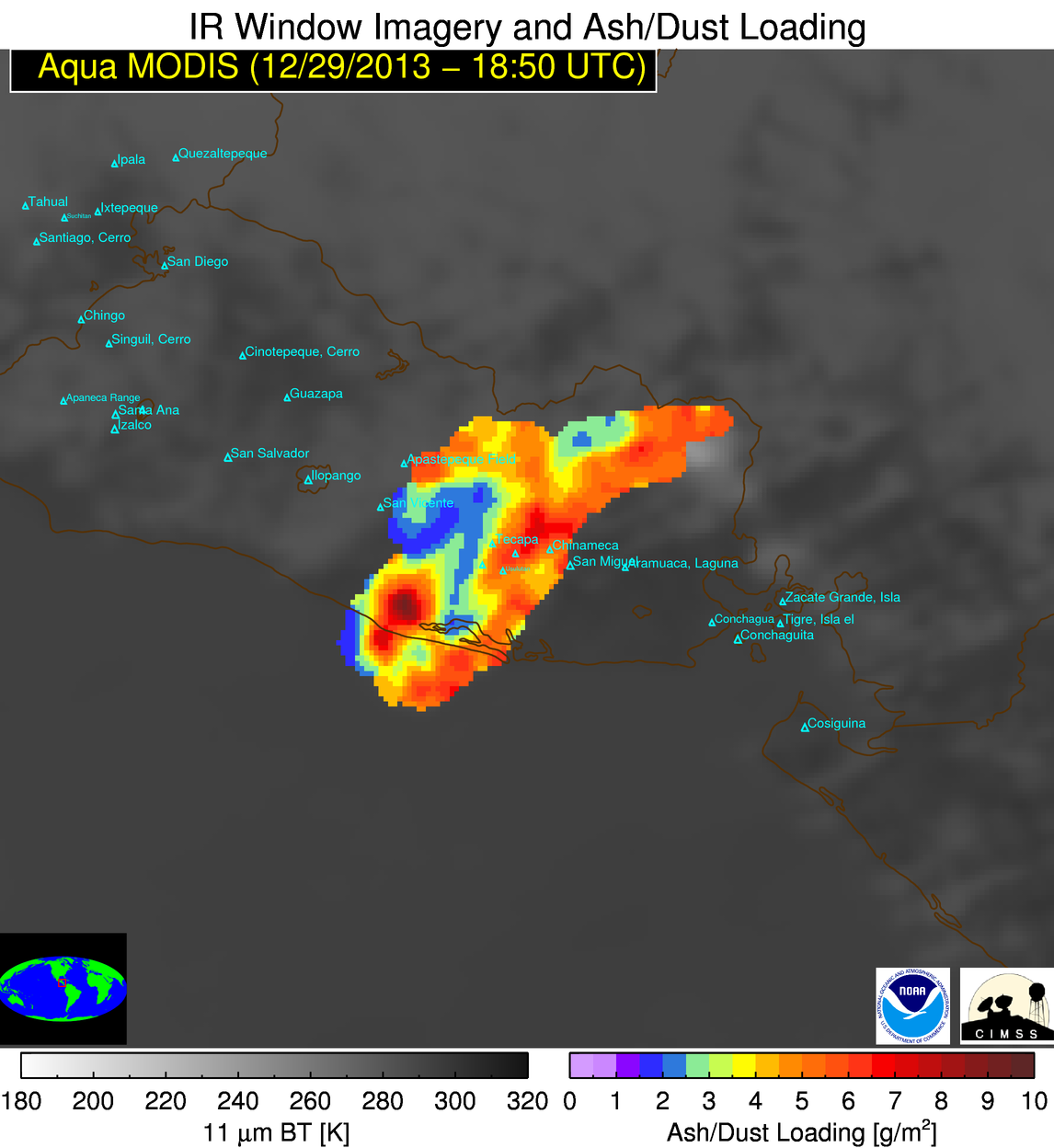 Sample ash mass retrieval image with 11 um brightness temperature underlay.
When an ash cloud is detected, the retrieved mass loading [grams per square meter] are plotted in color with the 11 um brightness temperature [K] plotting in grayscale as an image underlay. A pixel with valid retrieved mass loading is indicitive of a pixel included in a detected ash cloud object. 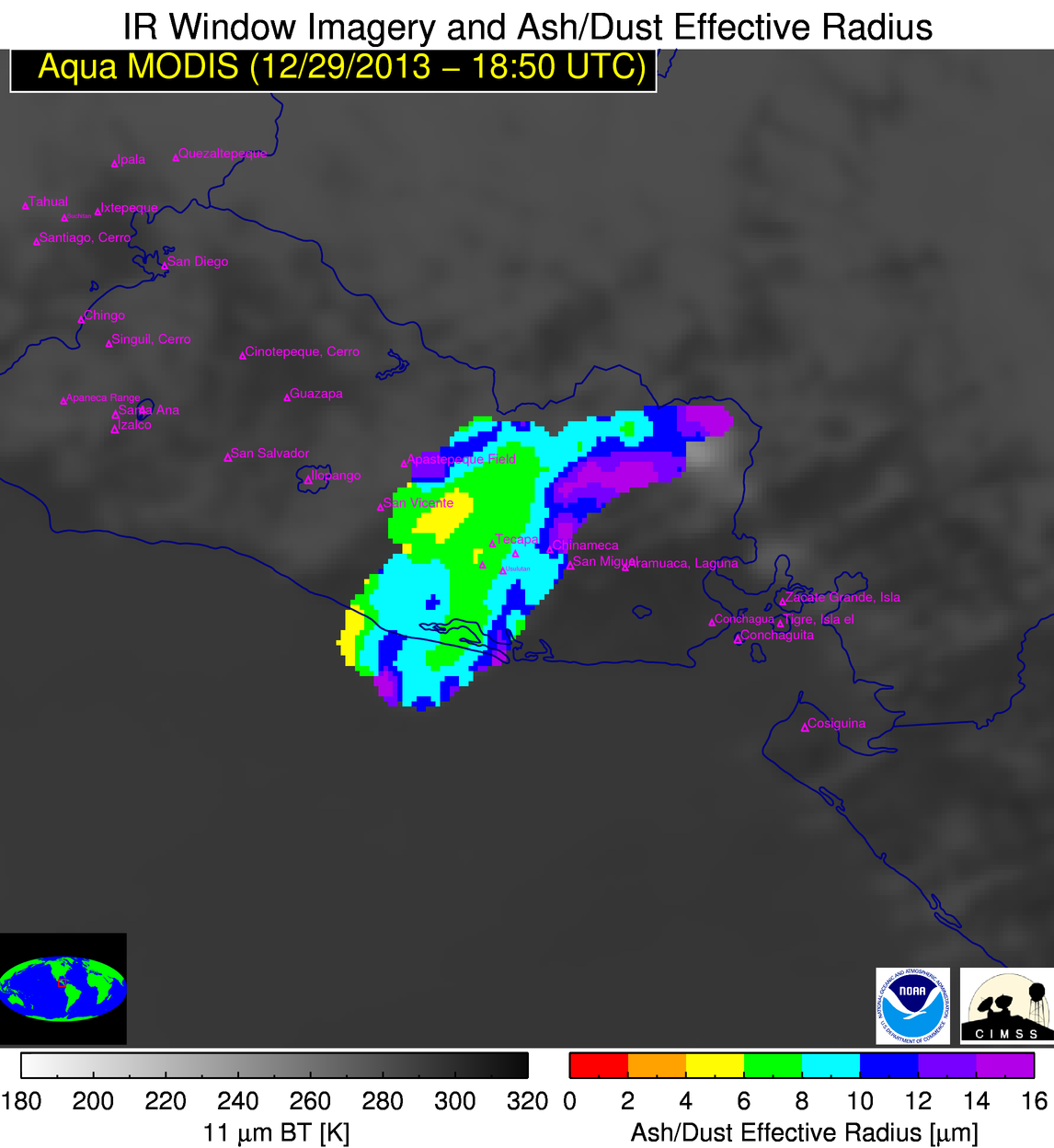 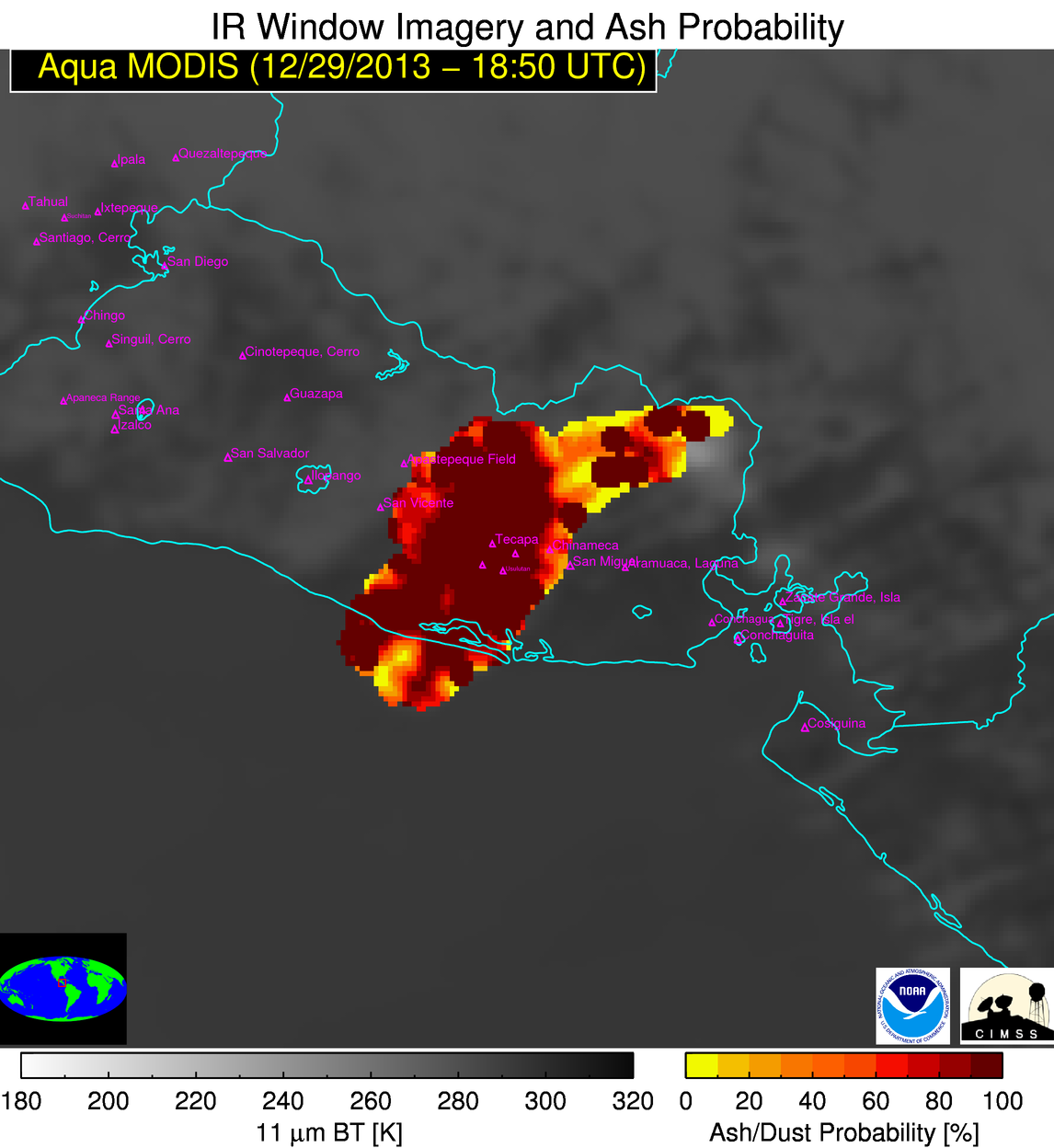 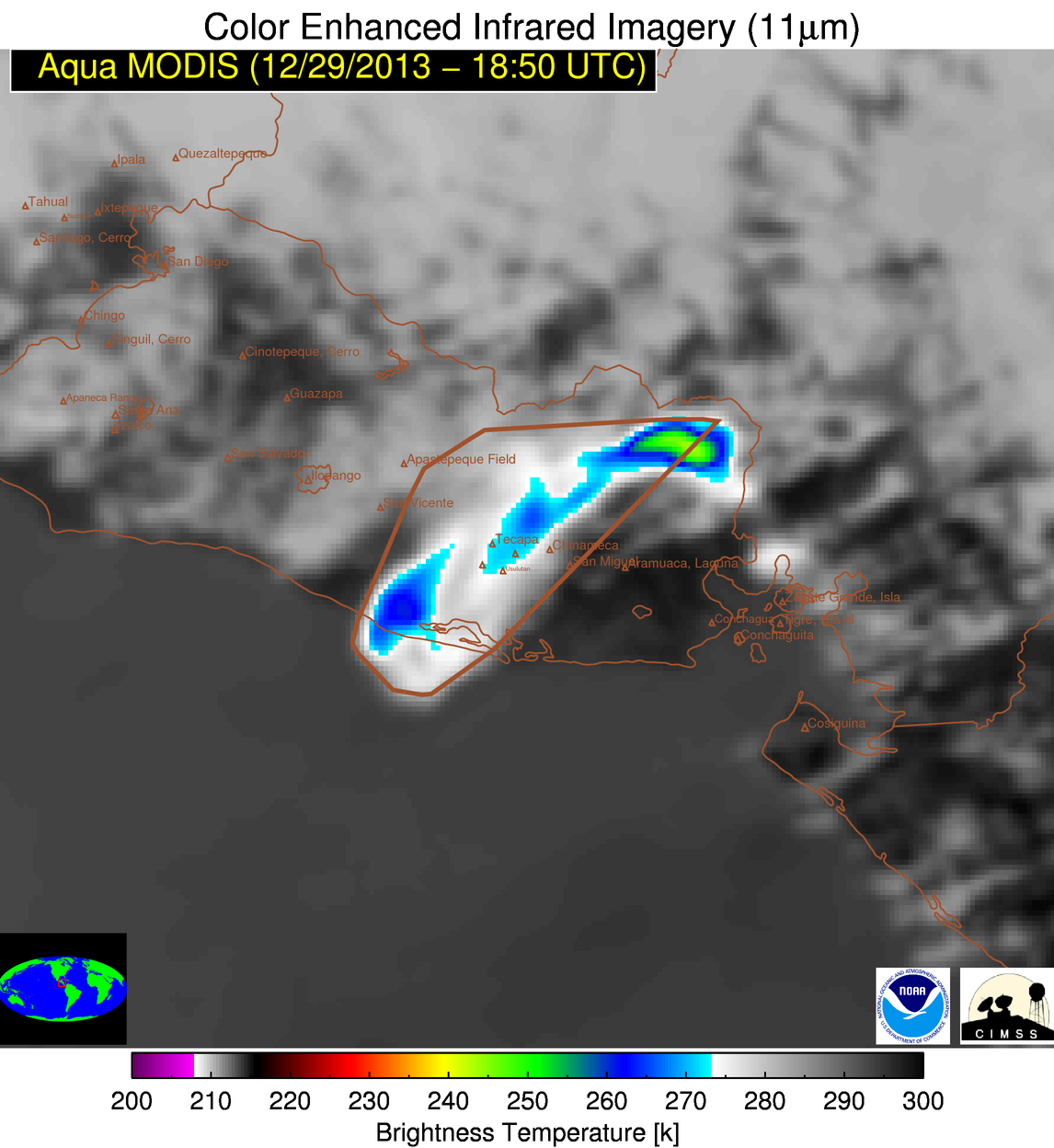 Sample color-enhanced 11 um brightness temperature image.
The 11um brightness temperature is displayed with a color enhacement. If an ash cloud is detected, the bounds of the cloud are outlined by a brown polygon. If a volcanic Cb was detected it will be annotated by a magenta arrow. If a volcanic thermal anomaly is present it is identified by a red box. 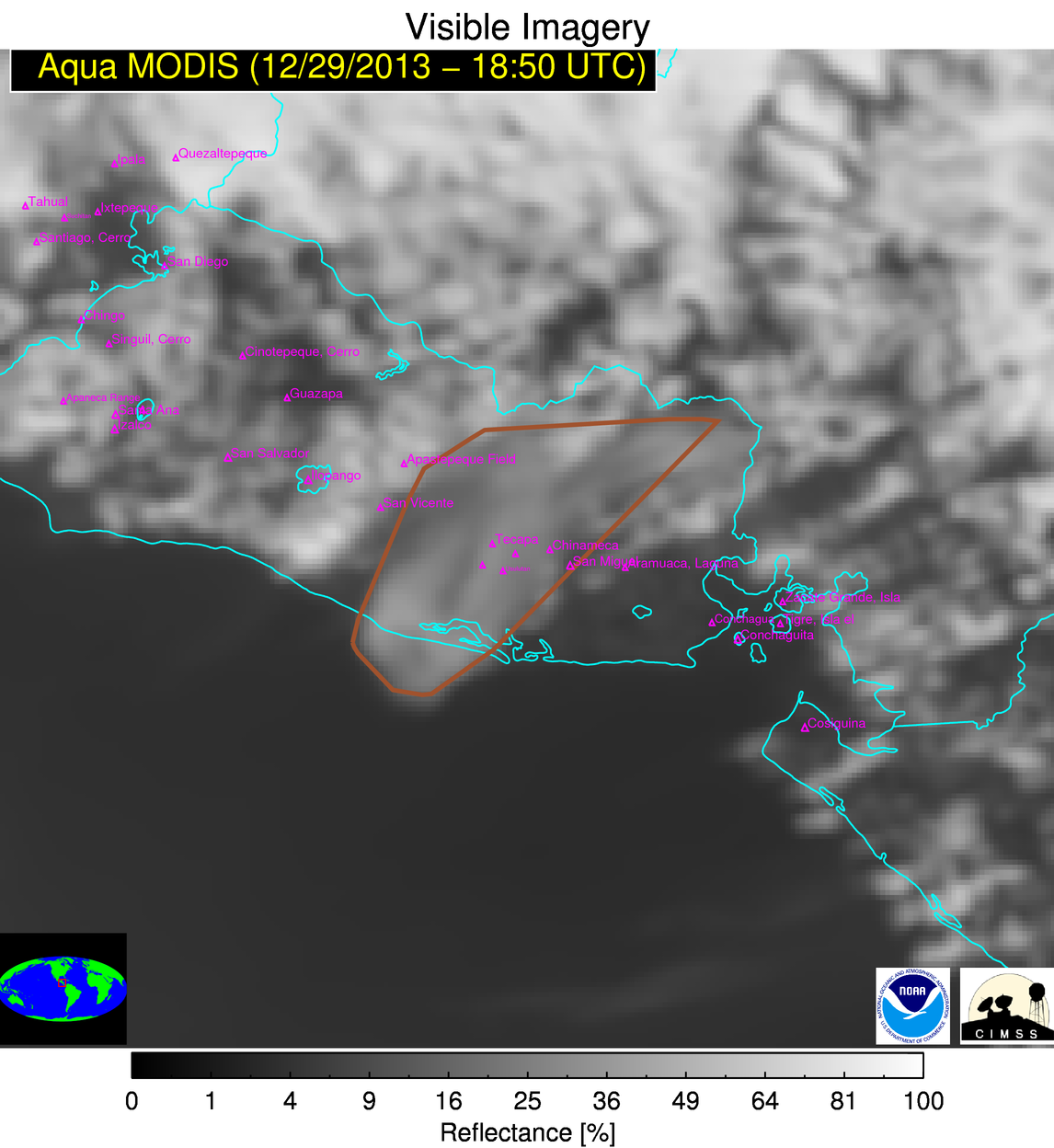 Sample visible reflectance image.
The 0.65 um (visible) reflectance is displayed with a grayscale enhacement. If an ash cloud is detected, the bounds of the cloud are outlined by a brown polygon. If a volcanic Cb was detected it will be annotated by a magenta arrow. If a volcanic thermal anomaly is present it is identified by a red box. 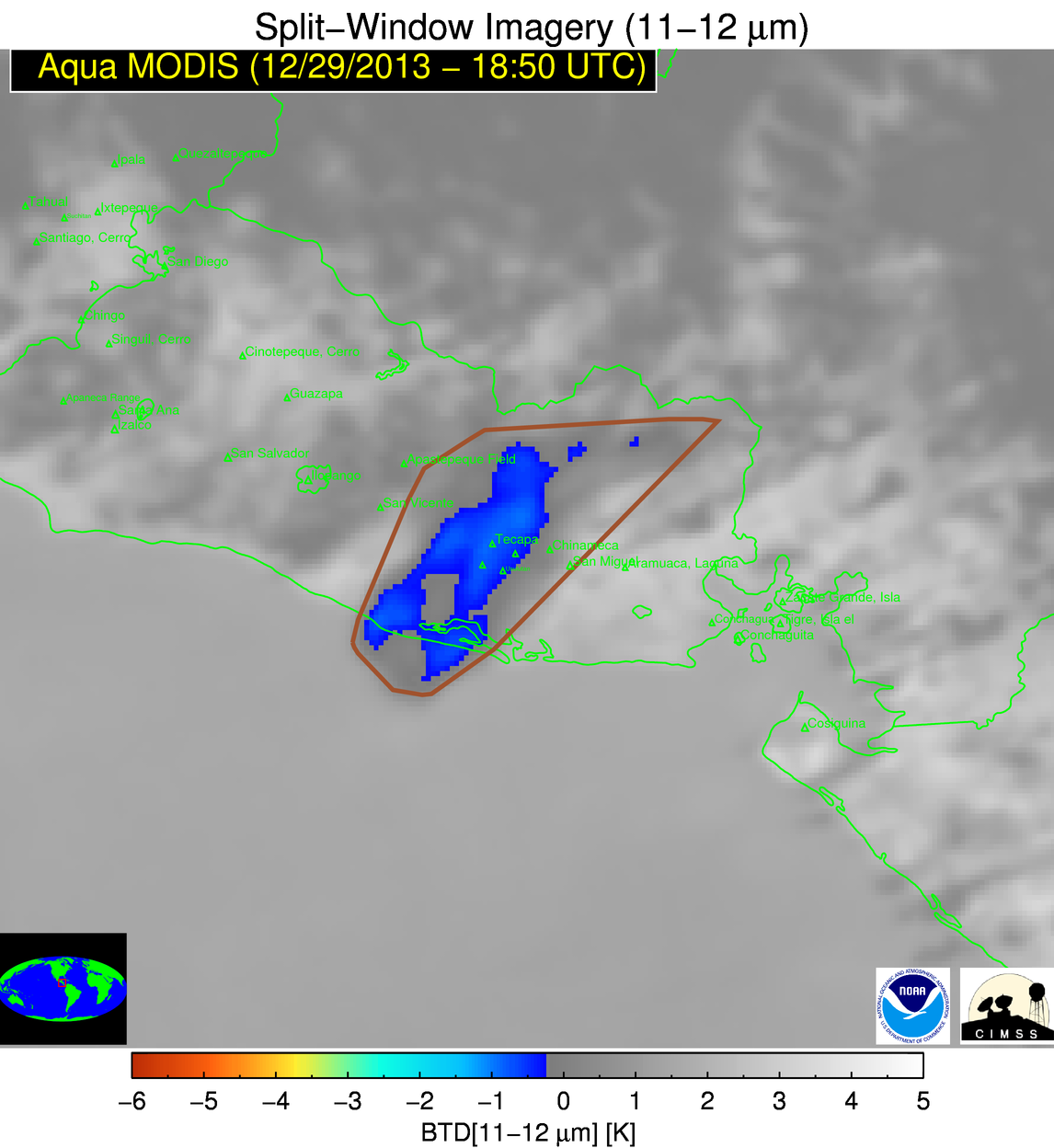 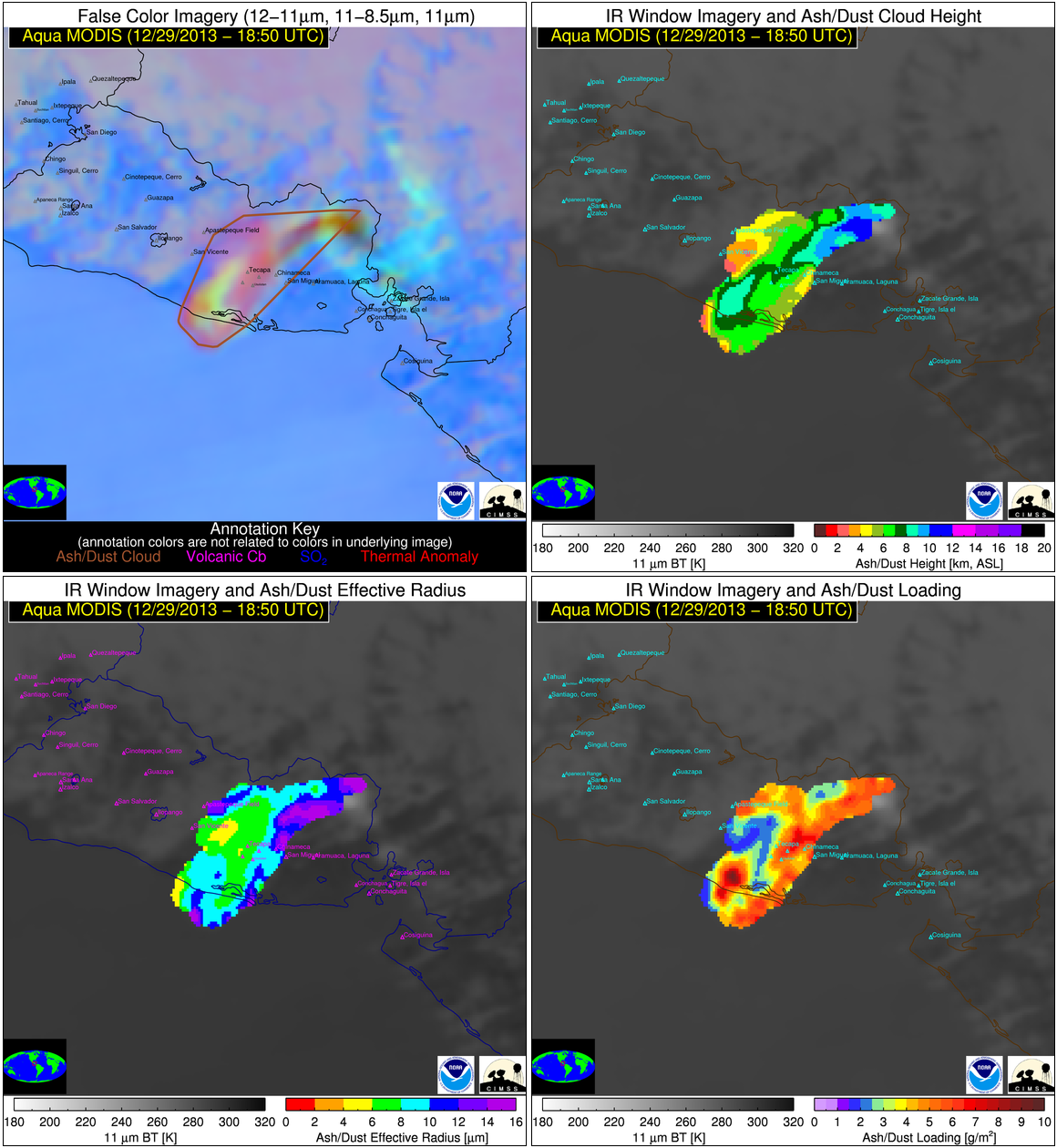 It is possible to receive volcanic cloud alerts in your email and/or via SMS text message in real-time. This section demonstrates how to create and edit your subscription(s) as well as customize what alerts you receive (account required).

1) To subscribe to real-time delivery of alerts click on the "Alerts" tab at the top of the web site. 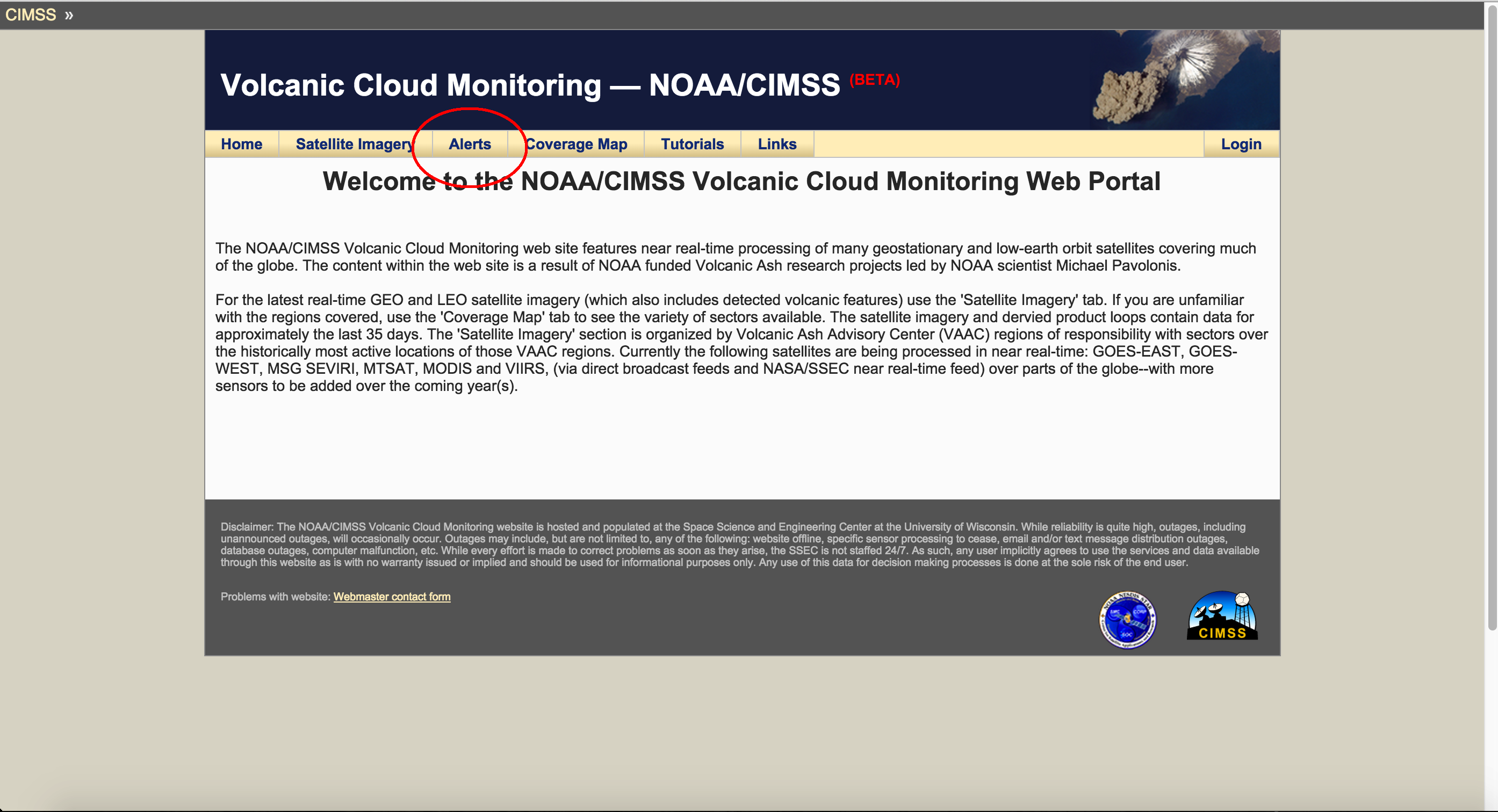 2) After clicking on the Alert tab, you will be prompted to login using your email address and password. If you have not already applied for an account you can request an account from this page. An approved account is necessary to view alerts and add alert subscriptions. 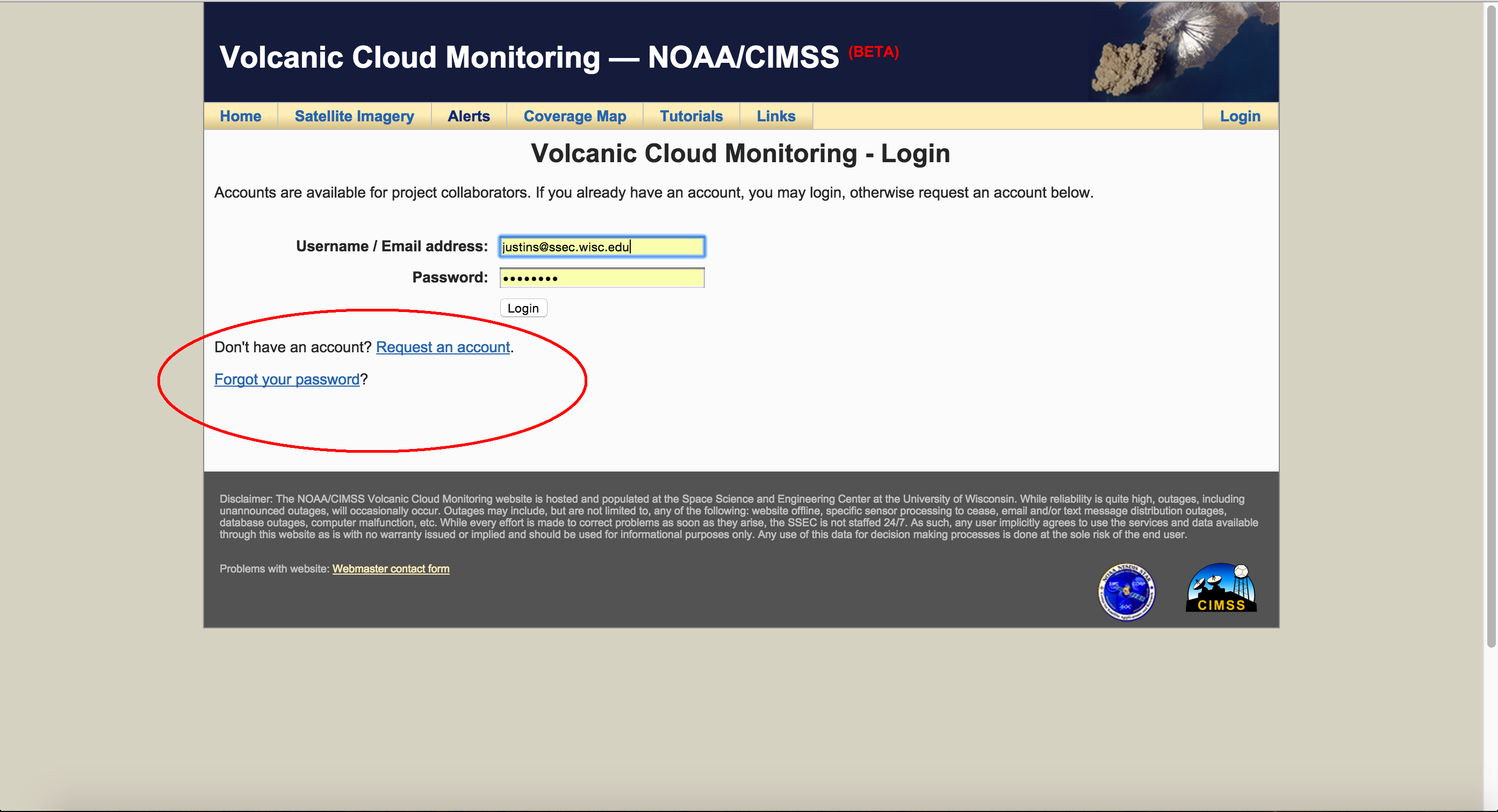 3) Upon logging in the alerts page will look similar to the screenshot below, with a calendar of alerts. This page is where you can add a subscription to real-time delivery of alerts. Click the "Subscribe to Volcanic Cloud Alerts" button located in the upper left corner of the alerts page. 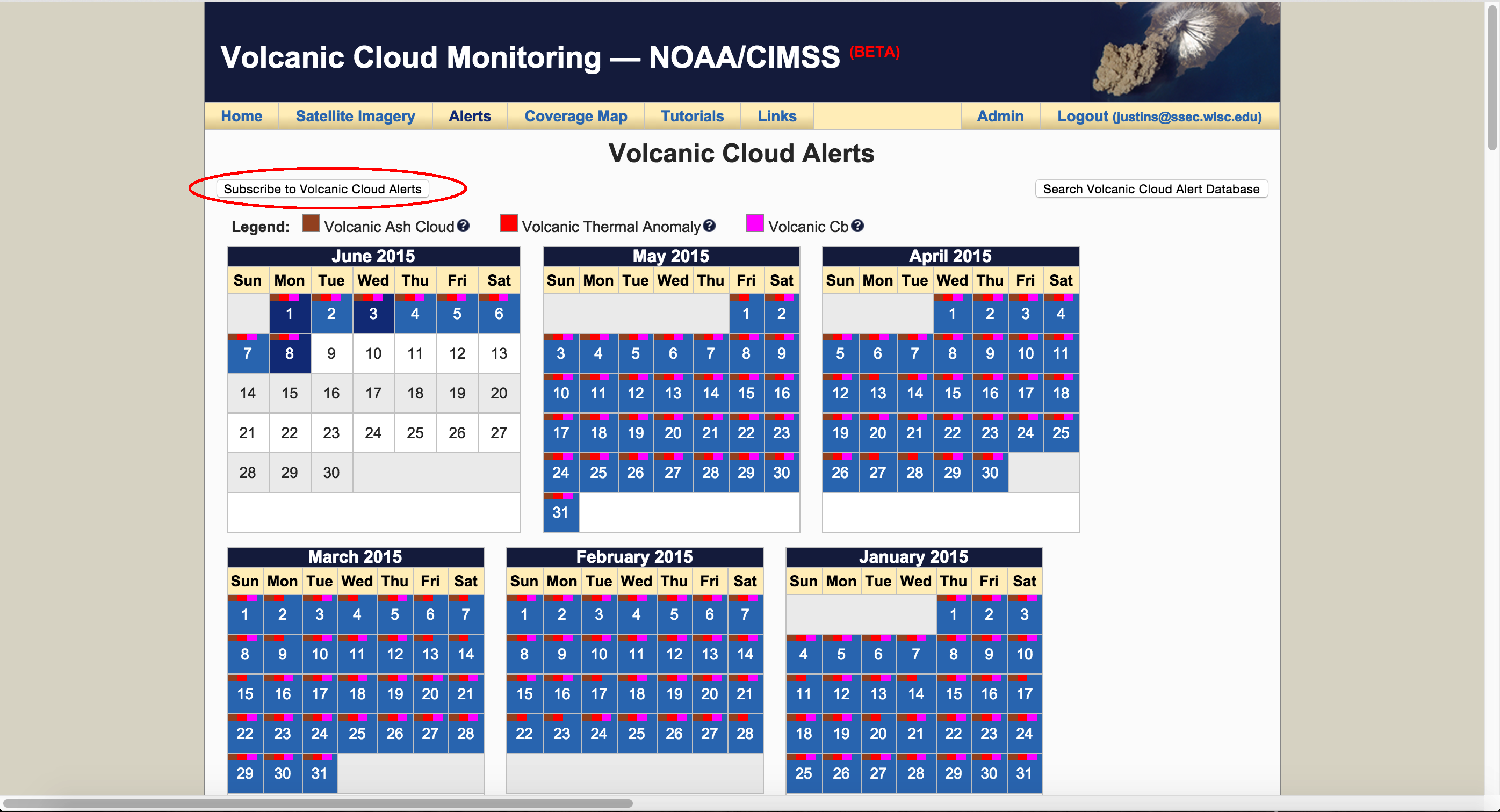 4) Click the "Add new subscription" button. This page will also list your subscriptions after they are complete. 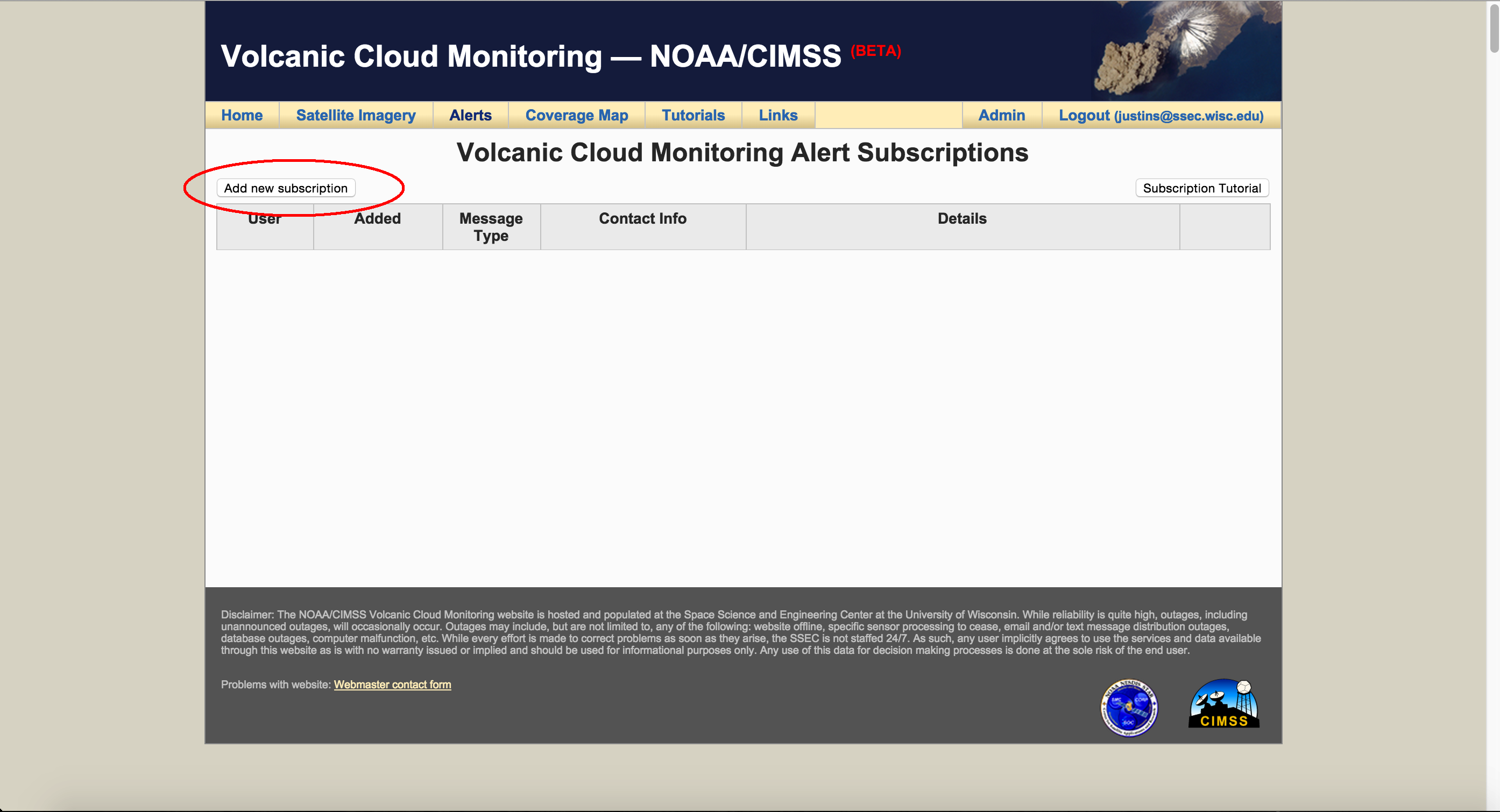 5) The first information necessary for adding a subscription is whether the alerts will be delivered via email or SMS text message (if you desire both, you will need to add two separate subscriptions). 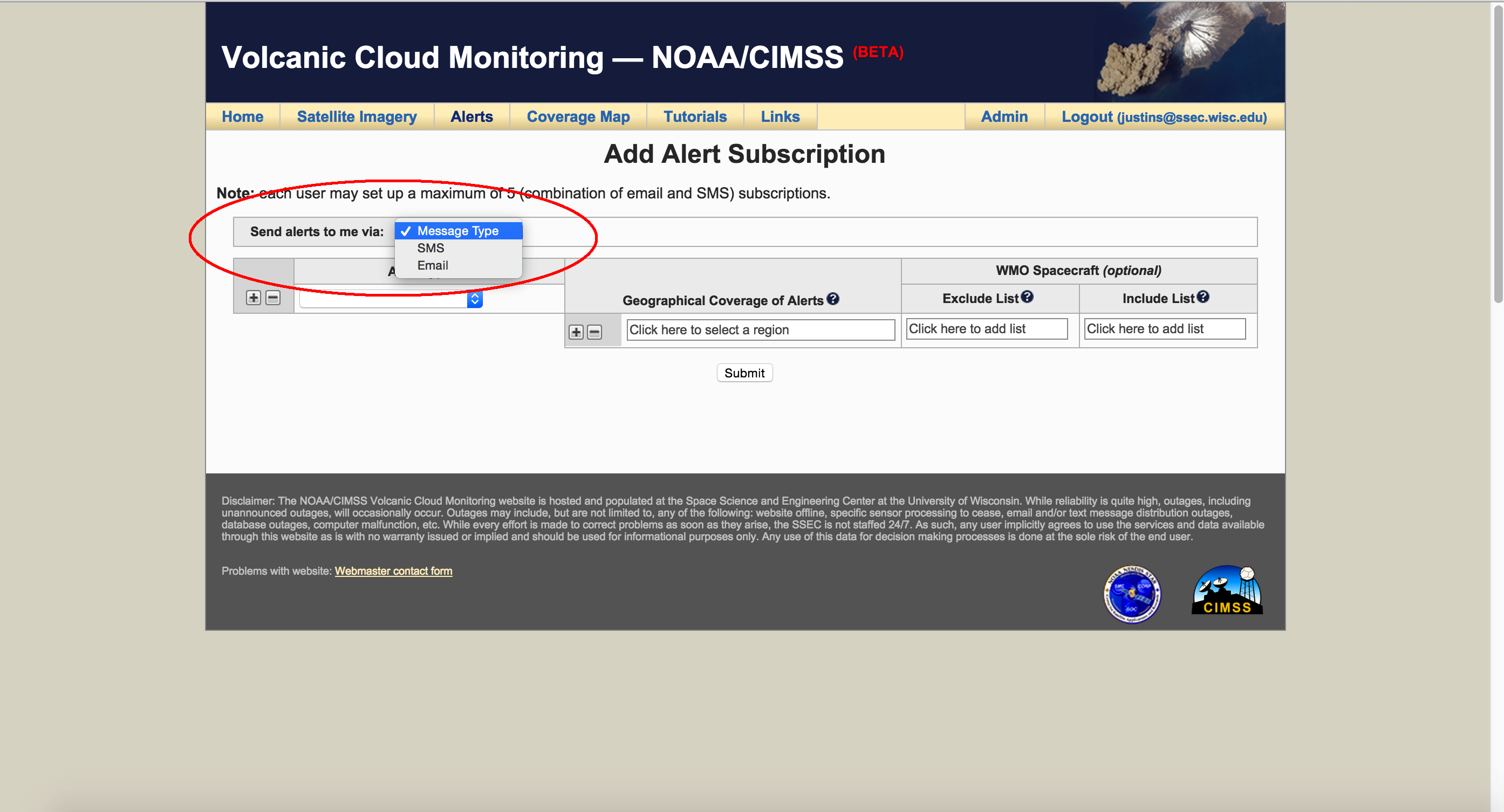 6) The second step is to select the "Alert Type" (Volcanic Ash Cloud, Volcanic Thermal Anomaly, or Volcanic Cb). For any subscription you may add any number of alert types--even multiple of the same type with different geographical and/or sensor customization (described in the following steps). The alert type selection is required. 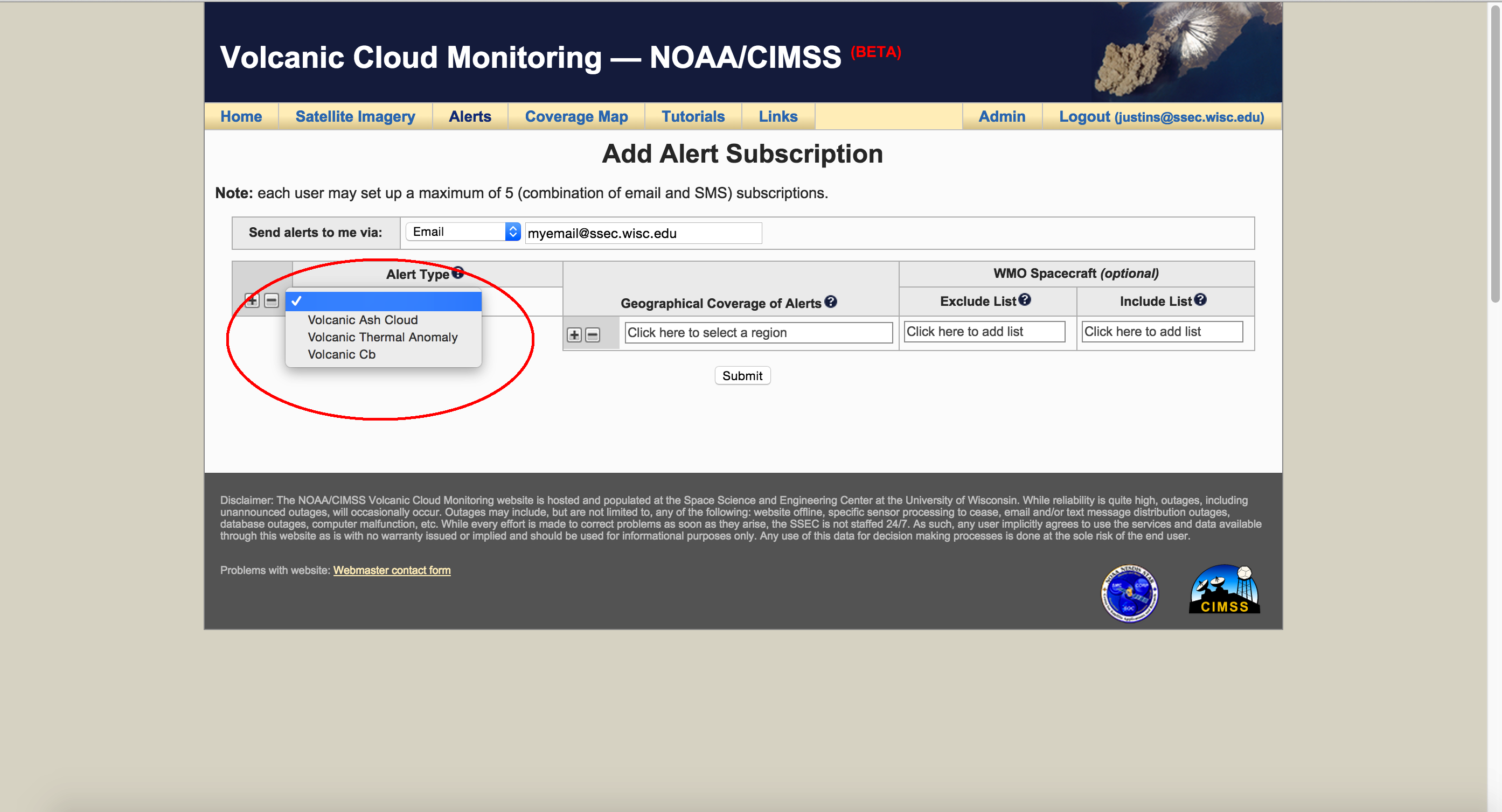 7) For the alert type you selected, now select the Geographic Coverage of Alerts, by VAAC region, country, subregion, or region. The geographical selection is required. 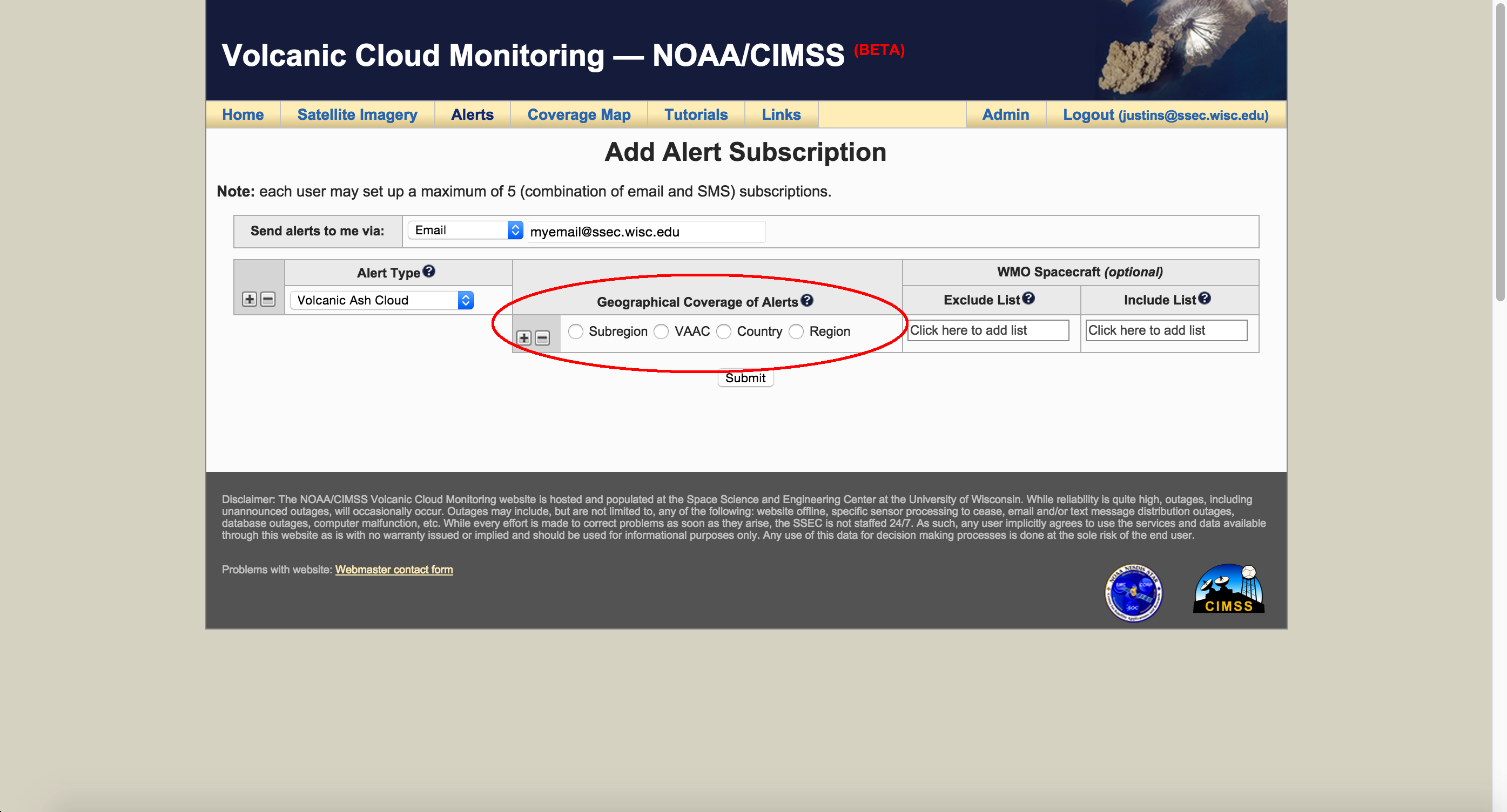 8) Optionally you may select specific sensors to be excluded (e.g.--you may only want LEO alerts, so you may exclude GEO satellites). You may also optionally select specific sensors to always be included. (The include list is limited to LEO sensors only--as a user may want an alert every time a LEO satellite passes over an ash cloud. Given the frequent sampling of GEO sensors, these sensors are omitted from the include list.) 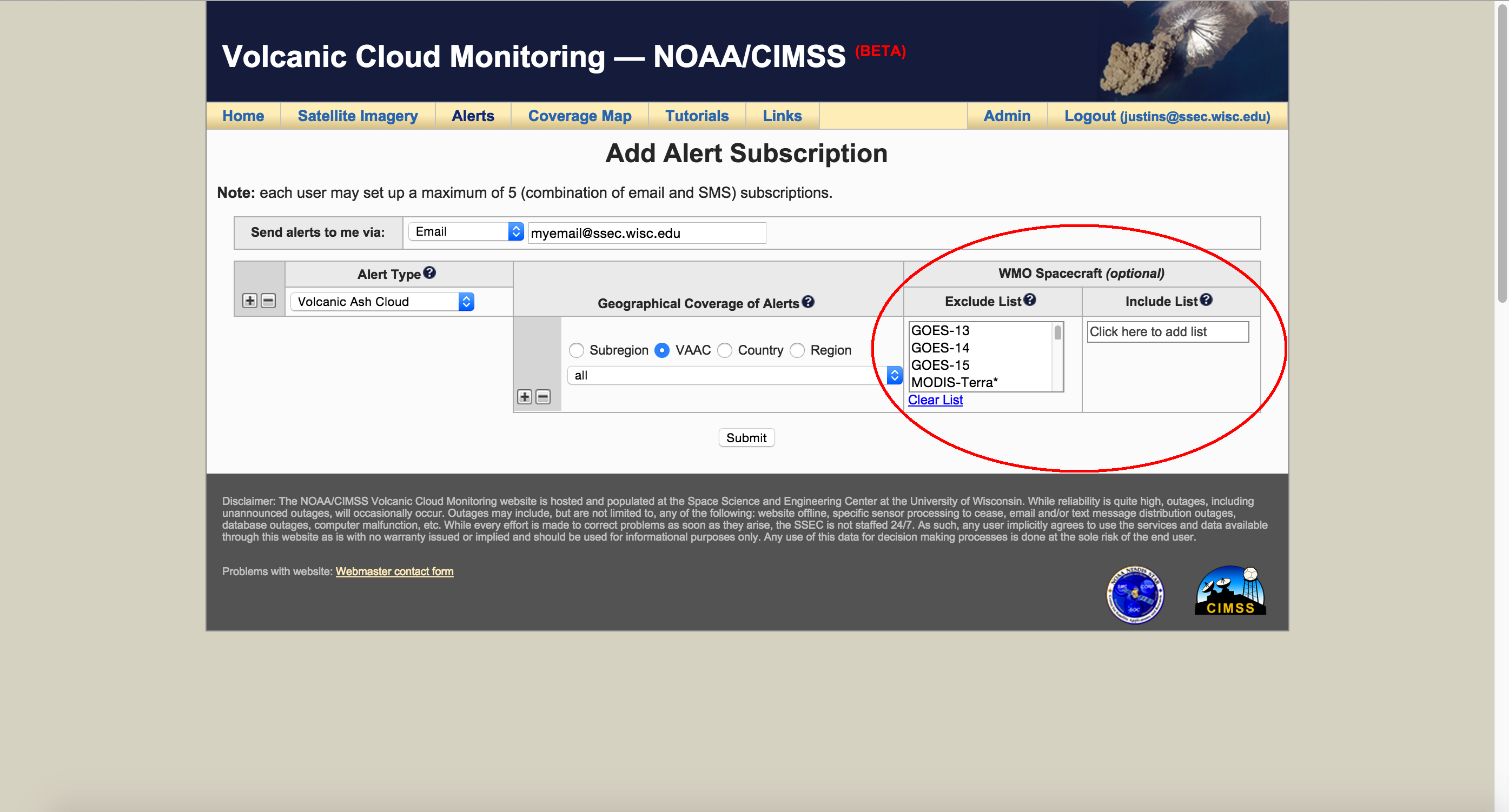 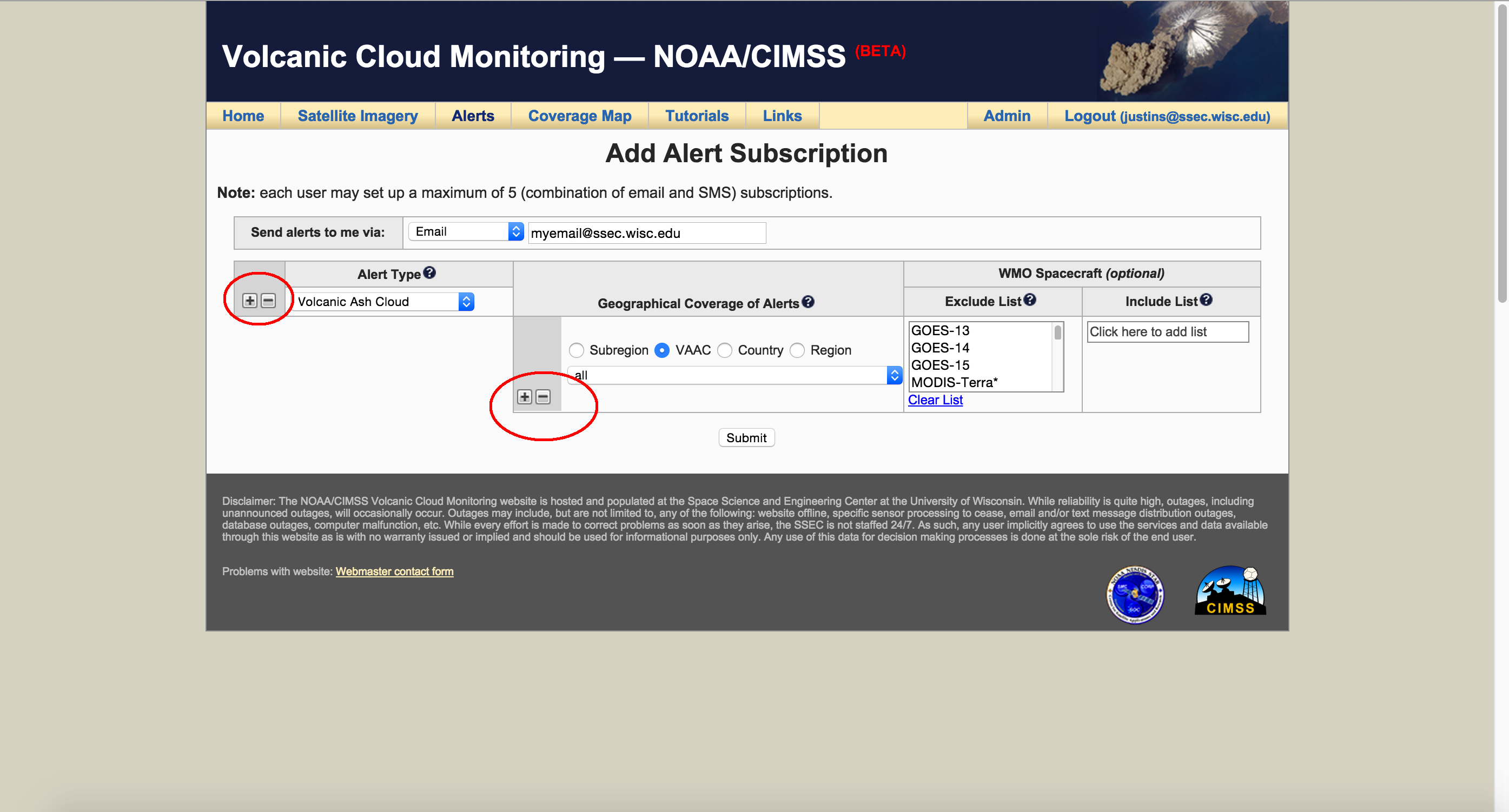 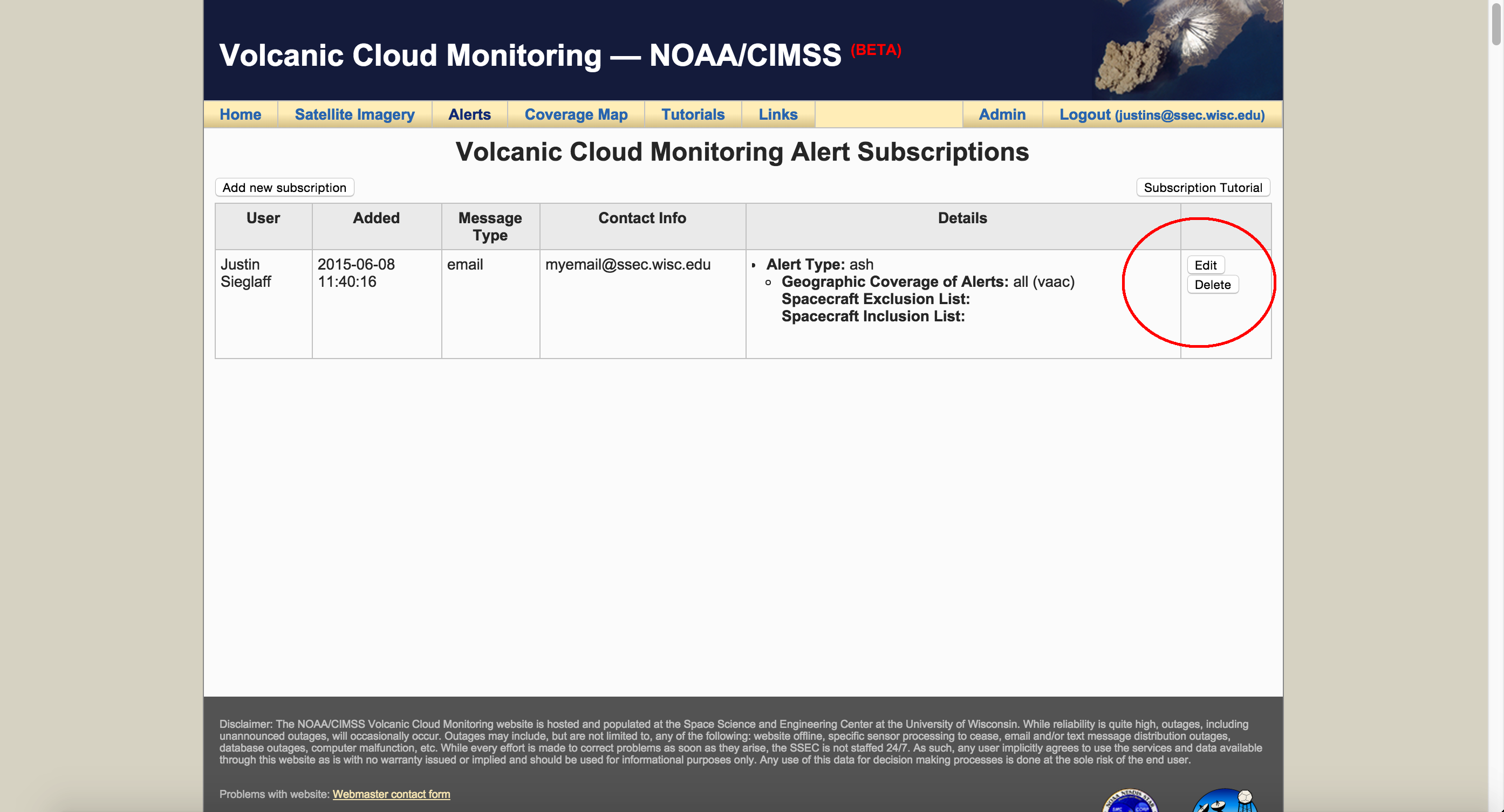